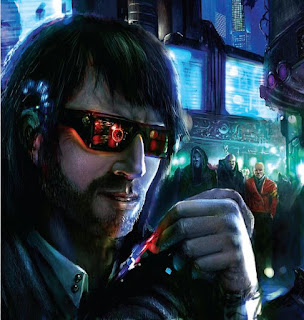 These are some half-remembered adventure-type things I've run for Cyberpunk 2020. It's weird, in a setting most open to people finding out about things and exploiting them on their own initiative, people are most eager to look for discrete jobs. Something to do with choice paralysis maybe?

Most of these ideas are quite nihilistic and nasty. People with money and power abuse it - if that's not your tone they'll need re-working. May as well talk about what my players got up to whilst we're at it.

My Child is a Prostitute and is Missing

The son of the local *big corp* division has a very specific tastes - exotics - which are people genespliced and modified for animal traits. Women with animal fur, ears, shit like that. The deal is a friend of the characters has a child, who is a prostitute. No big deal so far, but they've gone missing. Search of their home reveals a datapad with the clients booked in - namely a lot of visits from the son mentioned above. There's signs of forced entry, maybe some people who got shot for being in the way of a corporate snatch team. They've been transported to the home of the son, who has:

a) many exotics already, all of whom have been memory-wiped and programmed for loyalty. If you wanted to get really nasty they could have cyberweapons built in, to double up as body guards.

b) his own private surgery at the back of the apartment (located deep into corporate territory, ofc.) wherein the missing child is sedated, awaiting the surgery and the mind-wipe. Obviously, this stuff is very illegal, hence the surgery being in the home.

My players first infiltrated the sex-fur party thanks to the Rocker in the party. They went in the back, brutally murdered the surgeon, and picked up the kid. One player was so disgusted with all this they blew the son's head clean off. This caused a riot of exotics running for the elevator whilst the heavy guys took out the security team that had been dispatched to investigate the band of heavily armed weirdos going into the rich-people tower complex. They ended up escaping via the sewers to avoid pursuit by aerodyne vehicles (basically harrier jump jets, but more helicopter-y.) They were paid in free noodles for life by Asian Juan, the proprietor of Noodlebar, the noodle bar, wherein bars of noodles are served.

The Pharaoh is an ex-military Cyborg Impostor

(this one was inspired by Transmetropolitan #2, which is sick)

Flights of Fantasy Inc. maintain several resorts, which are slices-of-life from distant time periods populated by many many clones. Incredibly rich clients pay huge sums to pretend to be people of power and import in these fantasy worlds.

The issue? A cyborg has gone rogue inside the Ancient Egypt Resort, and nerve-gassing all the clones isn't a cost-effective measure for dealing with. The players are. This cyborg is tooled up to all fuck, with laser eyes, appearance changing camouflage (hence him being to kill the pharaoh clone and replace him) and a secret stash of plastic-body guns he smuggled into the resort.

Payscale will vary depending on how many clones need memory wipes/outright replacements. A flat rate for removing the cyborg is low, but you can keep the body and all the black-ops enhancements he's toting.

The players poisoned his food so much that his cyber-liver couldn't handle. He died messily. Cooking contests between guards were involved.

(offering players quick and easy bounties is a nice way of breaking up the larger, more involved operations. This one is not that)

A corporation is offering 10k for the (live) return of an experimental heart contained within the chest of a carrier, who has since gone rogue, and is selling the heart for 50k, or the highest bidder. They've done this to pay for the medical bills of their brother. They are protected by a pretty solid mercenary team, and have a tunnel to the sewers hidden on the ground floor of the building they are selling from to escape. The leader of the mercenary group is a well known sniper-for-hire. The organ mule is desperate and is making very stupid decisions - even with the money from a sell, about half goes to the mercenary outfit, making this a very temporary fix to her brothers's medicals bill.

The party said 'fuck this' and instead decided to look into other lines of employment.

This can be thrown in anywhere really. Basically, the hot new drug is pumping experience/emotion into your skull via datajack - these blackmarket datajacks being very crude, and very damaging. A drug-den is now a lot of people with cables hanging out the back of their skulls, tended to by drug dealers toting sub-machine guns. If the players decide to fuck with the drug dealers, they've got a very crude, very basic ATTACK program they can use to burn out the brains of the junkies, and use them as attack-zombies. Cheap and nasty, just like the drug-chips. They're pretty shitty combatants but have numbers and covering fire from the drug dealers, so they can be used to quite a horrid effect.

The players killed fucking all of them without remorse.