So, I visited Warhammer World last week, and they have reprints of the first edition of 40k, one of my favourite books growing up. I couldn't help myself, but the purchase was made on the condition I actually make use of the book. This is that.

So, the set-up is rag-tag groups of mercenaries take on jobs as they see fit, building their bands with 150 points. Success means getting paid, which is more points to grow the band.

The Frawgmn - 10 Slann with chainswords and hoverboards, which are disgustingly cheap.

Expurgatorum Eternus - I sold the setting as 'Mad Max but 40k' and this player went in on that. 4 weird, zany characters and 10 gretchins armed with nothing but slings, shields and frag grenades.

The Culture Club - In Cyberpunk Tuesday, one of the players rolled literally Boy George, who had a following known, naturally, as the Culture Club (made up entirely of cyber-psycho boostergangers). These guys follow suit, being led by our favourite member of the Culture Club, Langurious Rex. They've all got armour and big big guns.

Morgok - Rather than a gang, this player is one ork, with maximum values across the range and a huge arsenal. He believes he is the re-incarnation of both Mork and Gork.

FLAME FARMIN' FLURAG FIRE FARMER - One of my players always plays against type. Always. So he bought a BATTLE TRACTOR and gave it flamers.

The Rowdy Four - Four Beastmen champions and a halfling they follow, for obvious reasons.

"Big Larry sez there's a secret cache of weapons and shit in the mountains! I'll show ye where, if you get the next round..."


Stuff in brackets above is the hidden information the players didn't have access to.

Nearly everyone went for the rumour, with only The Rowdy Four and Flurag deciding to tackle the farm - except Flurag didn't. Instead, using his battle tractor, he killed the people waiting to collect the cattle, and took their stuff, including the reward. Since they didn't have heavy weapons, they were entirely unable to fight back.

The Rowdy Four, meanwhile, had a decent engagement against the farmers with their shotguns...until the dinosaurs turned up. 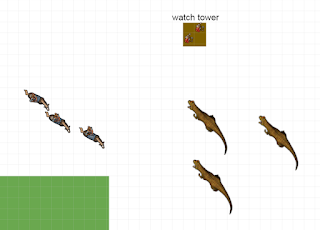 The dinosaurs ruined everything, nearly killing 2 of the beastmen before being distracted with delicious horseflesh. They did manage to wrangle the cattle, only to be severely fucked over by Flurag's take on the situation. Revenge will be had.

Despite everyone deciding the turn up for the rumour, Morgok and The Frawgmn were both equipped with hoverboards, turning up significantly earlier. This resulted in incredibly tense hover-board duels, chainswords bouncing off Morgok's stupidly thick hide, eventually resulting in Morgok stealing the Frawgmns Heavy Bolter, before flying off into the sunset. 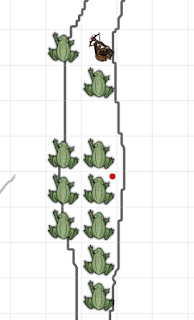 Rules-wise this was an utter bastard, due to the continuous movement. The fiction occuring was incredibly cool however, so it worked out pretty nicely.

As Morgok fled, the other warbands began to roll up - causing the Frawgmn to dismount and enter the tunnel systems, running into... 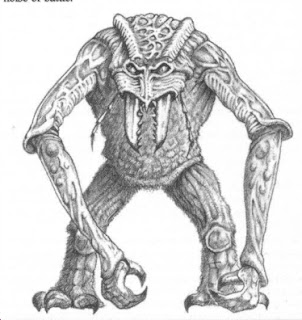 Ambulls! The Frawgmn were utterly butchered, the entire group murdered whilst the warbands on the surface struck an accord. They decided to split the loot three ways, having heard the screaming and tearing coming from then tunnels. 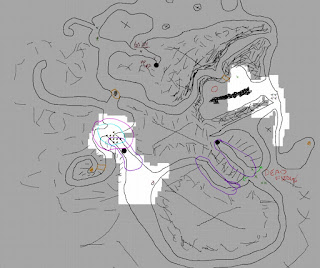 Expurgatorum Eternus was split by a ravine from the others, and ran quickly into an ambull, which killed the entire command group bar Doc Hairy, leading to the rebranding of the group into Doc Hairy and the boys. Whilst this was going on, Morgok returned, swooping into the tunnels atop his hoverboard. Running into and Ambull, and utterly destroying it with a multi-melta. Not finding the hidden cache quickly enough, he decided to leave again, letting the other 3 bands split the loot. Eventually, after cooking a few more ambulls, the found the hidden cache and returned to Helsreach.

ROGUE TRADER IS REALLY FUN FOR THIS SMALL SCALE STUFF EVEN IF THE RULES ARE A TAD CLUNKY I RECOMMEND PLAYING IT HIGHLY
Posted by Luke Gearing at 13:56 3 comments: