A mouth screaming
bawling like infant
pained by itself, a
call into the void.

We listen and take
the pain upon our
selves, the better
to lessen and to
sate.

Idiot cancer twitches
and we dance around
casting the feed to
that great maw, a
wound in Earth.

The Old Hunger exists somewhere in your world. It did before, but you are now cognizant of it. Like a wound that only hurts when you look at it. This wound is old. It seeps. Now you are picturing it twitching, spreading the influence, and it's rot. A cancer in the fabric of your narrative and in your game. Pray the players will cut it out before it desolates another world.

The Old Hunger is just that - the sum of hungers since the creation of your fiction. Cells competing, animals hunting and killing and eating, gods waging their spiritual wars. Woven into the very fabric of everything, inherent.

The Old Hunger is rampant. It has changed. This is why it rots, grows beyond control, consuming that which it dwells in. That which it eats does not fuel further creation any more, it is simply eaten, removed from the chain. Feeding the bulk of Old Hunger.

The Old Hunger always finds those who are prepared to serve. They are special. They are marked. There are two servants, and their numbers are many.

Speaking Mouth cuts out their tongue and grows a silver spike. They are not truly of the Old Hunger, but they see it. They comprehend it, and know it's need. They are the farmers carefully tending the harvest. The chef preparing the food expertly. The waiter delivering the meal.

Eating Mouth is inhuman, humanity shorn from them as they accept their role. They burn with the hunger. They are physically the mouth of Old Hunger. They howl madness and void and the infinity of endless, boundless starvation from beyond stars and closer than skin. Everything they eat is irrevocably destroyed. They warp to fit anything into their maw. Inside is just blackness.

feed.
Posted by Luke Gearing at 20:56 No comments: 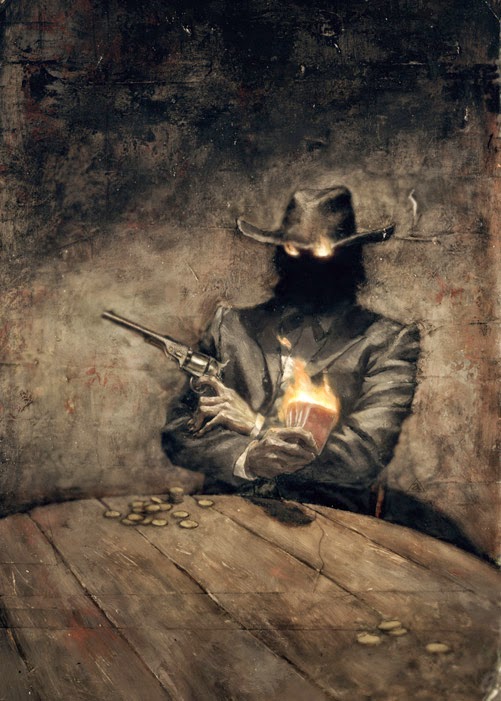 LotFP players are currently in Cthulhu-Western land. Guns are listed at the bottom.

Men with smiles like rigor mortis rictus. Beneath the hat a hole in the forehead, bleeding. Inside is just the blackness. The speak slow, deliberate. They stalk the wastes and kill.

Whenever a 6 is rolled on any of the damage dice, roll on the Hexed Round chart.

These firearms (bar the shotgun) ignore physical armour. They have standard range penalties, barring the shotgun. Use the light crossbow for the ranges, except long is <200'.

The future is a terrifying place. Atmosphere-capable ships can rupture your lungs and cause you to drown in blood through pressure waves. Their weapons can destroy you from orbit. Asteroids can be towed and dropped, rendering planets tombs. People have a vested interest in keeping hostiles out. In almost all cases, defences will be connected to an overall defence grid with several limited AI co-ordinators and fail-safe systems. These defensive systems are in addition to the protection afforded by standard orbitals and patrolling ships. The following measures are in a roughly ascending order of rarity.

MPDO - Multi-Purpose Defensive Orbitals are technically capable of turning their guns on ships, but their main purpose is to intercept and destroy asteroids, whether they be on a natural collision course or guided by enemies. They are relatively fragile and wouldn't do much against a cruiser-class ship.

GODL - Ground-to-Orbit Defence Laser systems are simply ship weapons mounted in terrestrial bases. They can be obscured somewhat by natural features, such as under oceans. They are cheaper than OODLs, and allow for larger weaponry whilst retaining these savings due to the terrestrial power infrastructure.

Orbital Mines - Orbital Mines are incredibly simple craft, functionally a passive sensor and a payload. Once the passive sensor is tripped by an activation signal, the mine detonates. They are very hard to distinguish from space-debris due to the complete lack of emissions. Many are camouflaged as such to further hide their nature.

OODL - Orbit-to-Orbit Defence Laser systems are simply ship weaponry mounted on a more compact orbital satellite. Due to lacking the advanced FTL propulsion they are somewhat cheaper, although obviously less mobile. They are significantly more expensive than GODLs.

ODHN - Orbital Drone Hive Networks are limited AI systems housing a huge number of self-destructive drones which scream towards enemies in distributed swarms. The payload carried varies, and the AI is more than intelligent enough to match up the ideal drone to the target.