Dying In A Tomb RPG 2 - Dying Harder in a Tomber

[No longer an LotFP hack. Main changes are initiative system, monetary system and generic fiddling all around. Now has a first draft of an equipment list.]

Dying in a Tomb RPG

[Work in progress, more of an LotFP hack at the moment. It'll be worked on I promise guv] 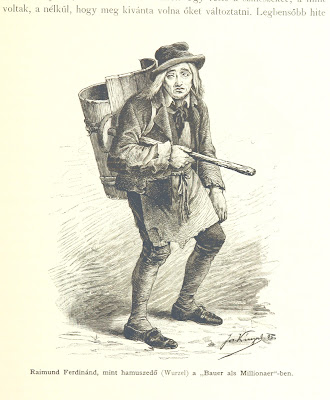 You're not heroes. You've got no class and you're desperate.

Each character has 4 statistics. Roll 3d6 (in order) to determine their values.

Constitution
A measure of toughness. Also reflects your HP.
Dexterity
How nimble you are. Helps avoiding damage.
Strength
A measure of raw physical power. Increases damage.
Wisdom
The ability to notice things, and unconscious caution.

Player characters get +1 to hit, and hit points equal to constitution.

I'm still working on money, so use lotfp standard I guess? With a mild adjustment, spoken about below.  (Playing around with using pounds/shillings/pennies because I'm awful)

Avoid fights. They're messy and people die. That said...

To hit someone, roll a d20 and add any relevant bonuses (to hit, conditional modifiers). If you roll high enough, you'll hit them. Now roll damage and add your strength modifier. They'll roll armour.

Initiative is side-based. Each side rolls a d6. Highest numbered side goes first.

Damage is as LotFP, but adding strength modified, as mentioned above.
The prices listed assume shit weapons. 1.5x for Normal, 3x for Good.
-

Your defence is based on your weapon. Nobody wants to get hit, so being armed is the best way to stop someone getting in too close. NB. Bestial enemies and attacks bypass this, always attacking as if the target is unarmed. However, they take one attack automatically as they open themselves up to you.

All of the above values are modified by your dexterity modifier.

Shields increase your step along the the chain by one. Awkward weapons are things like pikes, bows, etc. Some weapons might be dual purpose.

When defending against ranged weapons, the weapon is ignored.

Armour acts as a damage soak. The dice size listed is the amount of damage absorbed by the armour. Every time it sustains a full damage attack, roll under 10 on a d20 or it degrades, protecting at one level less.

As you get damaged, your ability to be an effective combatant is reduced.

Recovering the corpse of an ally allows their XP to be purchased in a straight money-for-XP conversion. This money is spent on the funeral for the player. This XP is divided between surviving characters.

The only XP gain is from treasure and Expenditure (covered below). Use the direct value of ALL loot recovered from the location and returned to an established 'safe zone' to determine total XP value, and then divide this between surviving characters.


When levelling, the characters may gain ONE of the following -

Expenditure is vast sums of cash on activities not immediately useful. There are two varieties - Carousing and Research.

Carousing is a big night on the town. The players should describe what they plan to get up to (drinking, whores, tattoos, drugs, etc.) The DM should invent some potential consequences or use a carousing consequence table. The characters carousing will gain some renown in the area.

Research is a less effective manner of gaining XP for accumulated wealth, but lacks consequences and has a small chance of being useful. It requires the character to be able to read, and access to a library (scholarly towns and cities only).

Spend d10 x 100 silver, and gain 1/2 of this amount spent as XP. Every 100 silver spent is a 5% chance to learn something useful. Before the next delve/heist, roll below the total % to gain a question to be asked the DM. This question must be answered truthfully, but must also be something reasonably learnt whilst researching. It can be asked any time during the raid, but must be used for that raid specifically.

It is on the player to explain how they attempt to achieve something. If appropriate, a roll will be made against one of their statistics, attempting to roll below their statistic value, modified by circumstance, methodology, etc.

Saving throws are used to avoid something, usually when you've fucked up. Again, it is on the player to describe (quickly) how the avoid the hazard, again, linked to a statistic. They should be warned if they're doing something impossible or stupid e.g. attempting to stop a rolling boulder with their fists, expecting a strength roll.

Magic is fucking terrifying and even more dangerous. If the characters are (un)fortunate enough to find a scroll, they can attempt to cast it. (Note that they will not know what the scroll does until they cast it). The character casting must attempt to roll below 10 minus the spell level on a d20. If they succeed, the spell is cast and the scroll is still available for use. Rolling up to 3 above the success number harmlessly discharges the magic, but spoils the scroll, Anything above this causes a horrific magical mishap, usually related to the spell at hand, or else using a mishap table. The scroll remains available for use on a mishap roll.

Gearing Guide to the Planes Issue 3 - Planes of Decay 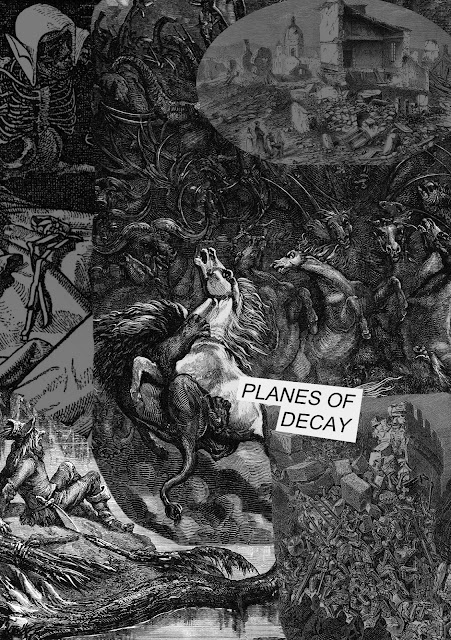 Nurgle blessed me with glandular fever, and so we have Planes of Decay. 3 Tables this time - where, who and what's the problem?

Posted by Luke Gearing at 10:45 No comments: