Me and the Thursday crew have decided to tackle Classic Traveller* for our next game on my relentless tour of RPG systems released before I was born.

*Using the '77LBBs** and Supplements 4 (more character careers) and 6 (76 Patrons)
**Except my copy of Book 2 is the '81 printing which gives some odd results, but nothing major.

Planet creation boils down to 7 dice rolls, with previous results modifying the next roll. This process gives you size, atmosphere, water coverage, population, government character, law level and tech level. Whilst these facts individually are rather dry, the potential for incongruity is a masterclass in forced creativity. A world with 100% water coverage, a population in the billions but a medieval tech level and ruled by a Religious Dictatorship? At first, nonsense - but with some thinking this becomes a nightmare of Bioshock-style tunnels, every passing year reducing the livable areas of this underwater city, squatting in alien iron passages foreign to their tools.

This gets better when you start chaining these planets together into your overall sub-sector map. A fascist dictator planet with advanced technology and a huge population here and two small, lower population words with the government type occupied just a jump or two away? Without any explicit mechanics for control zones or inter-planet empires, we've got a powerful planet expanding their borders through military means - ripe for smuggling, blockade busting and rebellion. 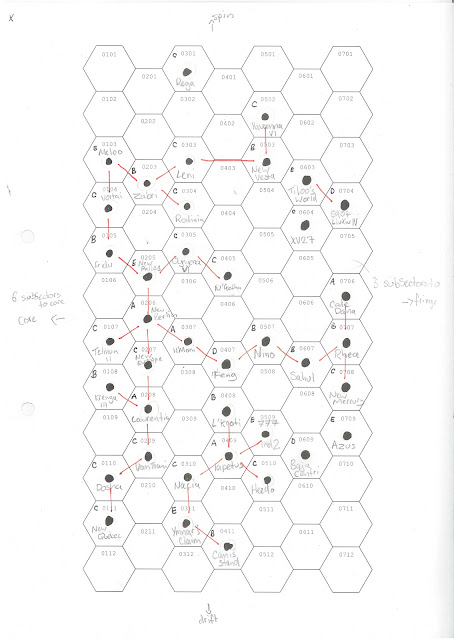 Generating the map by hand forces you to learn the sub-sector a lot more intimately - online generators don't feel as personal.

A lot of these planets immediately suggest some of the high-level political and cultural elements - but how do the players access this? (If something doesn't inform play meaningfully it's wankery, IMO) From my understanding, it's up to the Referee to make it matter by tailoring the Patrons to the situation locally and further afield. Patrons are your classic Mr Johnson - powerful or driven individuals looking for 'independent contractors' to deal with situations either beyond them or requiring a level of distance. Generally these are less-than-legal if not outright criminal (more on this later) as judging from the Patron table ( a d6xd6 table consisting only of titles/archetypes describing the Patron). Here we run into the first issue - there's no guidance on what pay should be, nor any more detail for generating the sort of work they're looking to have completed. Whilst a lot of this can be inferred or seems obvious by cross-referencing the planet/subsector info against the Patron title, more of that procedural goodness for the actual Patrons would've made this part of setting up play much much easier. In a few places I've just directly references jobs out of the 76 Patrons supplement, or else used them for inspiration - as well as for attempting to baseline appropriate payment. Still, it seems a shame that these very important figures, directly driving play, were given short shrift here.

Speaking of Payment - Traveller seems to sing best when you're trying to make mortgage payments. Although I've read advice saying "you don't need to give them a ship!!!" I gave them a ship. The repayments system is explained in some detail before the game describes the ship meaningfully to you, which, to me, highlighted the importance of this aspect of play. By default, players owning a spaceship are locked into an eye-watering 40 year mortgage, paying 1/240th of the total value of the ship per month. For my players, this means the venerable Type A Free Trader, a 200 displacement ton ship capable of the basics, with enough of a hold to speculate on and freight cargo. The monthly payment for this is roughly the equivalent of 4 groundcars - which are not cheap.
Quick aside - this sort of thing slots in nicely with shit like Inventory Management and Rations and stuff - stuff often handwaved away as boring - but when this stuff goes wrong or limits activity, they generate very very interesting decision making. They themselves are not fun - but the consequences are.
All this means the players need to be making serious, reliable money. And this is technically feasible only using the cargo freight and passenger tables. On a good roll. For every trip. And so the mortgage does it's magic and forces the players to get creative with their money making - or to agree to some of these less-than-legal Patron jobs spoken about above. Almost like it's all meant to slot together into a cohesive game experience.

Rolling characters for Traveller deserves the reputation it has, especially when you're actually generating characters for play. The tension and hype of the survival rolls is so much higher, the lows crushing and successes a real triumph, when you're dealing with characters you're actually using. Despite being low-to-minimal in obvious RP queues, the system surprises once again with forced creativity from unexpected results - our Scientist with maximum Intelligence and Education scrubbing out after 4 years - during his graduate scheme effectively. From that, we got Alphus Magnus, the narcissistic prick who was kicked out of every research facility for being so fucking unlikable. We also have Grula Hug, who spent 16 years in the Imperial Navy and never once got commissioned, remaining a humble midshipman, but learning intimately the grubbier side of Naval life, as well as getting a powerful network of informants in any Naval base.

These are the characters who survived.

Running through these tables naturally gives you a shape of the character, which means we can invent their deaths when the dice take their fill - each 4 year term spent in service requiring a Survival Roll. Players (usually) choose if they wish to stay in or muster out, making death your fault. A Diplomat assassinated in their first posting (their brother, the players next character, used the Death in Service bonus to put themselves through Law School, despite being thick as pigshit). Numerous Scouts torn apart, lost in space, shot over petty squabbles. A 14-year-old Belter, desperate enough for the job and paying the price. These character generation tables set tone, expectation and built immediate attachment to the characters they generate without any art or window dressing - pure mechanics.